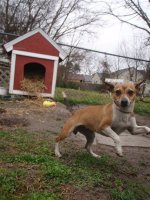 The following was written by Emily Allen, CAP Associate Director.

As Forrest Gump might say, fieldwork performed by staff of PETA’s Community Animal Project (CAP) is kind of like a box of chocolates—because on this job, you never know what you’re going to get. We rescue abandoned, abused, and neglected animals in the areas surrounding PETA’s Norfolk, Virginia, headquarters. It’s a big task, and we are looking to expand our team.

On any given day, we could be crawling through a sewer, climbing a tree, or digging through a junkyard to rescue a terrified animal; shuttling animals of low-income families to our no-cost to low-cost spay and neuter clinics; or traveling into an impoverished neighborhood to deliver doghouses, bedding, food, and toys to animals who have been left outdoors.

We often come to the aid of neglected “backyard dogs” like Rambo, whose owner had left him trapped in a filthy pen with no food or water and whose every bone stood out like bare limbs on a tree. We worked with police to get him confiscated, and the owner was convicted of cruelty. That sweet dog, so trusting despite having been betrayed, was adopted by a fantastic family, gained 30 pounds, and now relishes the safe, comfortable indoor life—except for romps in the park, of course—that every dog deserves.

We are also called upon to help suffering stray and feral cats. One old cat was so severely injured that his image will stay with me forever. His side was practically covered by an open wound that was teeming with maggots. A woman had been feeding strays in her yard but was apparently oblivious to the cat’s condition. We whisked the dying animal back to our office and gave him a peaceful release from his suffering.

Every day and every story are different, but I leave work each day feeling that, like the tale of the child who was saving the starfish who washed up on the beach, I may not be able to help them all, but I can help this one and that one and this one.

Researchers hope changes in desert rat can help other animals