The 'On-Demand Economy' Is Reshaping Companies And Careers September 11, 2016 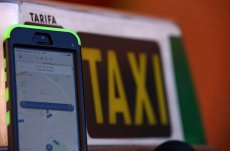 REUTERS/Sergio PerezA car-sharing service app Uber on a smartphone next to a taxi sign is seen in this photo illustration taken in Madrid on December 10, 2014.HANDY is creating a big business out of small jobs. The company finds its customers self-employed home-helps available in the right place and at the right time.

All the householder needs is a credit card and a phone equipped with Handy's app, and everything from spring cleaning to flat-pack-furniture assembly gets taken care of by "service pros" who earn an average of $18 an hour.

The company, which provides its service in 29 of the biggest cities in the United States, as well as Toronto, Vancouver and six British cities, now has 5, 000 workers on its books; it says most choose to work between five hours and 35 hours a week, and that the 20% doing most earn , 500 a month. 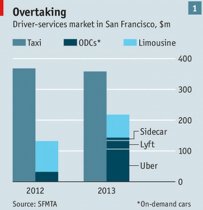 The company has 200 full-time employees. Founded in 2011, it has raised m in venture capital.

Handy is one of a large number of startups built around systems which match jobs with independent contractors on the fly, and thus supply labour and services on demand. In San Francisco-which is, with New York, Handy's hometown, ground zero for this on-demand economy-young professionals who work for Google and Facebook can use the apps on their phones to get their apartments cleaned by Handy or Homejoy; their groceries bought and delivered by Instacart; their clothes washed by Washio and their flowers delivered by BloomThat. 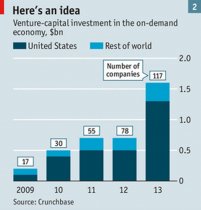 Fancy Hands will provide them with personal assistants who can book trips or negotiate with the cable company. TaskRabbit will send somebody out to pick up a last-minute gift and Shyp will gift-wrap and deliver it. SpoonRocket will deliver a restaurant-quality meal to the door within ten minutes.

The EconomistThe obvious inspiration for all this is Uber, a car service which was founded in San Francisco in 2009 and which already operates in 53 countries; insiders say it will have sales of more than $1 billion in 2014.

SherpaVentures, a venture-capital company, calculates that Uber and two other car services, Lyft and Sidecar, made $140m in revenues in San Francisco in 2013, half what the established taxi companies took (see chart 1), and the company shows every sign of doing the same wherever local regulators give it room. Its latest funding round valued it at $40 billion.

Even in a frothy market, that is a remarkable figure.

Bashing Uber has become an industry in its own right; in some circles, though, applying its business model to any other service imaginable is even more popular. 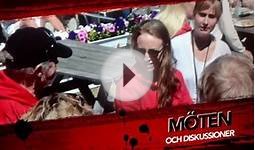 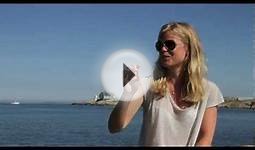